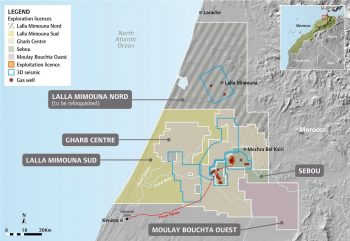 SDX Energy Plc announced the commencement of the second phase of its 2021 drilling campaign in Morocco, with the spud of the KSR-19 well. KSR-19 will be followed by the SAK-1 well which, if successful, will open a new exploration area for SDX in the Company’s Lalla Mimouna Sud concession.

Mark Reid, CEO of SDX, commented: “I am pleased to announce that the Company has commenced the second phase of its 2021 drilling campaign in Morocco. This second phase will consist of two wells with the objective of adding reserves to allow us to continue to deliver gas to our customers in line with their contractual requirements. Furthermore, with SAK-1, we hope to open a new exploitation area at Lalla Mimouna Sud to the west of our core producing area. I look forward to updating the market in the coming month on the results of these wells.”

This first phase of the 2021 Morocco drilling campaign consisted of three successful appraisal/development wells in the Company’s operated Gharb Basin acreage (SDX: 75% working interest). The second phase consists of two wells, the first of which is KSR-19 which spudded on 18 November targeting the Main Hoot reservoir at an approximate depth of approximately 1,780 meters TVDSS. This will be followed by the SAK-1 well targeting a Guebbas reservoir at a depth of approximately 1,300 meters TVDSS.

Both wells are looking to encounter shallow, biogenic gas accumulations. KSR-19 is near to the Company’s existing infrastructure, thus enabling the tie-in to be completed quickly and at low cost. SAK-1 is a little further from the existing infrastructure, but will still be relatively quick to tie-in and, if successful, will open a new area for follow on drilling and further exploitation. The Company is utilizing the drilling rig that was previously stacked in its yard in Morocco, thereby incurring minimal mobilization costs.

The campaign is expected to complete in December 2021, at which point the Company will update the market on results.